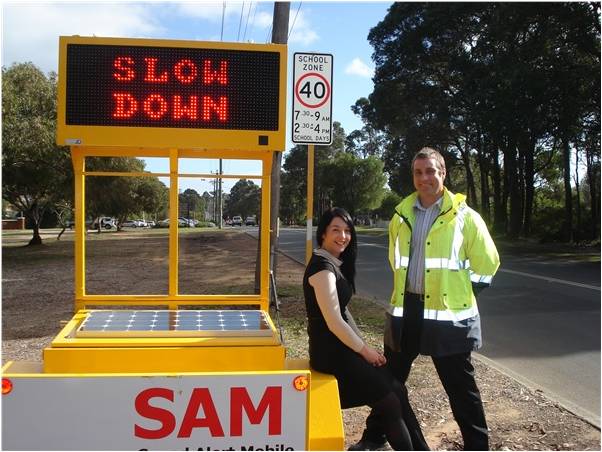 Many councils in Western Australia have already implemented the Speed Alert Mobile Trailer Program as part of their commitment to educate drivers, to travel within the posted speed limit, and reduce speeding in local roads. The following article describes in more details the City of Melville’s Program.

The City of Melville’s Speed Alert Mobile (SAM) Trailer Program is an initiative designed to make motorists aware of their driving habits and the negative impact excessive speed can have on the peace and safety of neighbourhoods.

The SAM Trailer Program will address the Safe Speed and Safe Road Use cornerstones recommended by the WA Road Safety Towards Zero Campaign.

Road safety is the number one priority at the City of Melville.

Speeding in residential streets is one of the most frequent concerns expressed to City staff and elected officials. Each year, the City receives many enquiries about installing stop signs, speed humps and other traffic calming measures as a way to reduce speeding.

Excessive speed in residential areas is dangerous and often viewed as destructive to the neighbourhood’s amenity.

The City established the SAM Trailer Program to encourage residents to become involved in addressing speeding problems in their neighbourhoods.

The Program promotes safe and prudent driving by motorists travelling along neighbourhood streets, and it will educate motorists on the posted speed of the road and make them aware of the speed they are travelling.

It is an educational program designed to raise public awareness of the actual speeds at which motorists are travelling within a neighbourhood.

Deployment of the SAM trailer also demonstrates the City’s commitment to reducing traffic speeds throughout its road network.

Recording of road speeds within the City of Melville showed that the 85th percentile speeds have dropped over the last five and a half years. While the reductions cannot be wholly attributed to the SAM trailers, their continued use, together with other traffic calming measures and road safety initiatives, has contributed to the downward trend in recorded vehicular speeds.

© 2021 A.D. Engineering International. All Rights Reserved. Designed and Developed by